RICKY RAPPER AND A STRONG MAN WILL PREMIERE IN FEBRUARY 2019 The hit book “Ricky Rapper and a strong man” will be shot as a movie. The film will be directed by Markus Lehmusruusu, helmer of the second season of the Finnish version of the hit series “The Office”. The movie is produced by Solar Films / Rimbo Salomaa, who also produced three first Ricky Rapper films, all box office smash hits. The executive producers are Markus Selin, Jukka Helle, Sinikka Nopola and Tiina Nopola. The distibutor is Nordisk Film and the movie is a co-production of Ricky Rapper Ltd. and Solar Films.

The main roles of Ricky Rapper and a strong man are all played by actors who haven’t appeared in the previous entries:

Of the crew of the three first Ricky Rappers, producer Rimbo Salomaa, screenwriters Sinikka and Tiina Nopola and composer Iiro Rantala will make a comeback. The principal photography commences on June 11th in the greater Helsinki area. The production is looking for extras of all ages and looks. You can send your application via Solar Films webpage:

The screenwriters Sinikka and Tiina Nopola comment on the movie and its background: “We are happy that the seventh Ricky Rapper feature film will premiere in February 2019. We wrote the script based on our 2016 novel “Ricky Rapper and a strong man”, but new twists and turns have been added to the story. And we’ve also written almost ten new songs for the movie, all composed by Iiro Rantala.” At this stage, the writers are very secretive about the story; “Ricky Rapper and Nelly Noodlehead are on a holiday, in a resort village. They meet a father and a son, Bill and Sylvester Pöntinen, preparing for a strength contest. All the characters have persuasions and suspicions about one another – and Ricky’s perception of Sylvester being just a bulging bragger turns out to be wrong. Sylvester has a secret which surprises them all.” 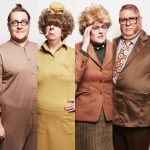 A DOCUMENTARY ABOUT LAKOTA PEOPLE AND THEIR ENVIRONMENTAL FIGHT WILL PREMIERE IN THE FALL2018, News, Uncategorized