V2 – Dead Angel, a hard boiled crime comedy. In the middle of the action is private eye Jussi Vares, a creation familiar from the detective stories by Reijo Mäki.

V2 – Dead Angel is a tough action thriller with a cast of cartoon-like characters. In the middle of the action is private eye and a die-hard law student Jussi Vares, a creation familiar from the detective stories by Reijo Mäki. Vares, a man in his forties, is a straight-forward man who hires his gun for confidential investigations to anyone, without too many questions asked. Vares, a tough guy, has only two weaknesses: cold beer and hot women and he can’t say no to either of them.

Jussi Vares, temporary broke as always, gets a phone call from the city of Pori. On the horn is his old school-mate Jarkko Tienvieri who offers Vares a job for a private eye. Tienvieri is under suspicion of a homicide of a young woman Mirjami Sinervo, that happened in the winter. The mission: to find out the real murderer and clean out the badly-tarnished reputation of a used-cars salesman.

Vares accepts the job and heads to the west-coastal city of Pori. Heading to the same direction is also a ruthless killer called Veikko Hopea, recently released from a Swedish penitentiary. In Pori, suffering under the heat-wave of the century, Vares soon finds out that things are not like Tienvieri lets him to believe. As he investigates Mirjami’s past walks of life Vares finds cover-ups and secrets every step of the way. The message is clear: better leave things to be. Just like everyone seems to be afraid of talking about Mirjami. What do they fear? Who are they afraid of? Her ex-neighbour Kullervo Visuri accidentally slips out the fact that Mirjami was scared too – but what of?

Vares finds himself in a dead-end and feels like he is being used, in a way that is foreign even to him. And before he can say Jack Robinson, another homicide takes place and everything turns upside down. Vares finds himself in the middle of a game far bigger than anticipated. And as his investigations proceed, he sinks deeper and deeper into the darkness behind the facade of the City.

In the end Vares finds out that the careless predator soon becomes prey. He gets to face the reason behind Mirjami’s fears. And as the day of the final countdown comes, Vares knows that by the time of the next sunrise, only one man will survive. Make no mistake – he aims to be that man. SCREENWRITER
Marko Leino after a novel by Reijo Mäki

Developed with the support of MEDIA Programme of the European Community 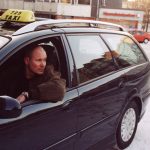