MARIA SID TO DIRECT RICKY RAPPER AND THE FAKE VINCENT

Silmu Ståhlberg, Lumi Kallio, Jenni Kokander, Ylermi Rajamaa and Minka Kuustonen in major roles. The previous entry of the franchise, Ricky Rapper and the Strongman has already over 276 000 spectators.

Maria Sid will direct the movie Ricky Rapper and the fake Vincent, the latest entry in the Rapper franchise, produced by Solar Films. The movie is based on the novel by the same title, written by Sinikka and Tiina Nopola and published by Tammi. The principal photography will commence in the greater Helsinki area on June 17th and wrap on August 5th, 2019. The premiere is scheduled to the fall of 2020.

The familiar actors from Ricky Rapper and the Strongman Silmu Ståhlberg (Ricky Rapper) and Lumi Kallio (as Nelly Noodlehead) return to their roles. The other main cast includes Ylermi Rajamaa in the role of Lennart Lindberg and Jenni Kokander, charming the audiences again as Freezer Elvi. The role of Serena Rapper will be played by Minka Kuustonen.

The movie will be produced by Rimbo Salomaa, Markus Selin and Jukka Helle and it will be distributed by Nordisk Film. The previous entry Ricky Rapper and the Strongman has so far an audience of 276 933 and is still in theatrical release. The movie premiered in February 2019. Both films are co-productions between Solar Films and Ricky Rapper Ltd.

Besides Ricky Rapper and the Strongman, producer Rimbo Salomaa has produced the three first Rapper films. The original crew of these blockbusters this time includes also screenwriters Sinikka and Tiina Nopola, who also serve as producers, and composer Iiro Rantala. The other members of the cast and crew will be announced separately.

Rimbo Salomaa rejoices about the crew: “We are very happy to work with Maria Sid, who is a true professional. She has directed several hit musicals in theaters and now moves her skills to the silver screen. It is fantastic to be involved in her directorial debut.” 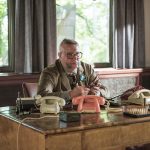 WATCH THE TRAILER OF FINGERPORI FROM HERE2019, News SAMI HEDBERG AND KITI KOKKONEN IN THE LEADING ROLES OF THE RENOVATION2019, News